My learning curve with the double hole rigid heddle continues

This morning, an email came in, explaining that I am STILL not getting the double hole rigid heddle weaving right… 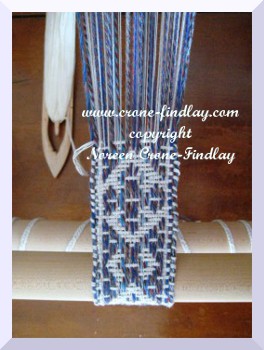 She pointed out that I am doing weft face weaving here, while the double hole rigid heddle are normally used to create WARP faced bands…

She also told me to not pick up the background threads on the even rows when the pattern threads are all in the up position.

I’ve tried that, and once again I have ugly long floats on the back of the weaving.

I really like the weft face weaving for the shirt that I am weaving, so I am going to continue weaving weft face.

And, I am stumped on the float thing.

When I did it ‘wrong’ and picked up the background threads, too, I got lovely reversible bands….

I am feeling very frustrated, so I am just going to get back to work, meeting design deadlines, and will try again later.

Update:  I sent her a note  in response to her suggestion to drop the background threads…. going ‘ackkkkkkkkkk’……

She sent me a note back this evening, saying, Oops… you did have it right! Just couldn’t see it in the video!

So I am feeling VERY relieved. I had gone back and done more weaving, returning to my previous way of keeping the background threads in the shed, and once again, the floats disappeared and the back of the band is lovely and reversible.

Well, it’s NOT reversible and it’s a good thing that  I am going to be stitching it to the shirt, because the back of the band is a progression of  floatie bits and woven in bits!

Once the shirt is done, those chronicles of “the learning experience” will disappear against the shirt, never revealing their untidy little secrets!

AND… Yep, the weft face is not the accepted norm, but, I like it, and I am going to carry on in the wrong way, as I find it quite fetching 😀

I find it just fascinating that there are soooooooooooo many variables in this intriguing technique!

I am so excited- I have just learned more exciting things about weaving with the double hole rigid heddle loom!

The other day, I posted a video about how thrilled I was because I had finally figured out how to weave with the double hole or 2 holed rigid heddle loom. Link to previous blog post

I had extrapolated from how I wove pickup on the inkle loom, and was, to put it bluntly, wrong wrong wrong about so much of what I was doing.

A lady on the Braids and Bands list LINK on yahoo very politely, graciously and gently let me know that there was a much better way to weave with the double hole rigid heddle.

She told me that the Latvian way is to NOT drop the background strands, but to keep them in the weaving- and ONLY drop the pattern threads when they are not called for in the pattern.

That way, they would form tabby weaving, with no long floats (Happy dancing!) with the pattern threads showing up beautifully in reverse on the back of the band!   H A P P Y  HAPPY  DANCING!

Who wouldn’t want their bands to be sturdier, and reversible?

I also decided to get over my attachment to the weaving stick, and to keep my hot little hands out of the weaving, and to weave it like a traditional weaver (I almost added the ‘put on the big weaver panties, but didn’t, oh wait, I just did….) and weave the band ONLY with my shuttle.

Well, of course, that speeds things up and I am now clipping along like Daisytrains, merrily weaving MUCH nicer bands!

Not perfect, but oh soooooooooooo much better!

I have deleted the first video, and have made another, showing my next stage of the journey.

Once, when I was a child, I must have said something very stupid, because my father raised his eyebrow, fixed me with a baleful gaze and pronounced that Abraham Lincoln had declared that it was better to remain silent and be thought a fool than to speak up and remove all doubt.

Well, I think that Abraham Lincoln and my father weren’t ~always~ right about remaining silent.

If I hadn’t had the courage to speak up and be willing to be found wrong about what I was doing with this, I would STILL be doing it wrong.

So, I say: Be willing to be thought a fool.

Speak up and ask.

There are kind people out there who are willing to show you a different way of doing something, and that way may make a world of difference in a skill that you are learning.

BUT… you’ll never know if you don’t have the guts to say:” This is what I am working on – got any suggestions?”

Besides, when you have big ‘aha’ moments in your learning curve, it can really be useful to other people!

So, that being said: Here’s the latest installment in my voyage of discovery with the 2 hole rigid heddle loom!