Last year, I wove my husband a shirt to wear while his Jazz trio performed at the Jazz festival and other gigs. Link to Jim’s shirt

It’s time to weave him a new shirt!

So, I have warped up my Saori floor loom and have started weaving the yardage for his shirt, and maybe some for one for me, too… we shall see….

The loom in the photo has a neat story.  Her name is Toshi-san.

I bought her several years ago from my dear friend, Terri Bibby, who is a master Saori weaver- check out her website: Link

When Terri announced, a few weeks ago, that she is hosting a Saori weaving conference in September 2012 on Salt Spring Island: Announcement

she received a lovely email from the lady who originally bought Toshi-san in Japan in 1990.

She went to the first international Saori weaving conference in Kobe, Japan, fell in love with Saori weaving, and bought a loom.

They took Toshi-san apart, and shipped her to Canada in little pieces, which she then re-assembled.

When I walked into Terri’s studio not long after Toshi-san arrived, it was love at first sight, and I bought Toshi-san on the spot.

I wove like mad on Toshi-san for a couple of years, but then got involved with other looms and she sat empty and neglected.

I felt guilty about her being abandoned, so I thought that I might sell her.

Luckily, my daughter-in-law said- DON’T!!!! And she took custody of Toshi-san.

She wove merrily away on Toshi-san for awhile, but then spinning and making roving with her hackle and combs became more and more of a passion.  She discovered that she’s not a weaver, but is a passionate spinner.

So, Toshi- san sat unused again…. but I was feeling sooooooooo called to her…………. so, now, she is happily ensconced back in my studio!

and…. now, I am having soooooooooooo much fun, weaving Jim’s new shirt.

I have a fondness for weaving inlays, so Jim’s shirt is going to have a lot of random squares and other shapes inlaid: 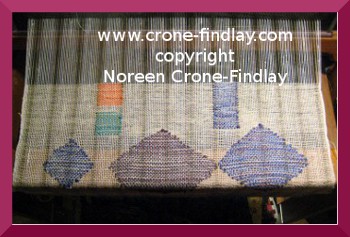 I love the philosophy of Saori weaving- it’s based in the belief of generosity of spirit, and exploring creativity and freeform expression.

I follow my inclination to work with this color or that, and place shapes here and there, and allow the weaving to grow in a very organic way.

The bands for the shirt, and the cuffs and collars are also coming along on my Cricket loom-

All in all, it’s a complete expression of love and delight and a celebration of my adoration for my soul mate, the wonderful man that has been my beloved husband for more than 3 decades 😀

Here’s a picture of Jim (wearing the shirt that I wove for him for last year’s jazz festival) and his trio.

You have to look hard to see the bass player- he’s wearing black and it makes him kind of invisible.

I was holding our gorgeous grandbaby, who fell asleep while Grampa and the guys played. 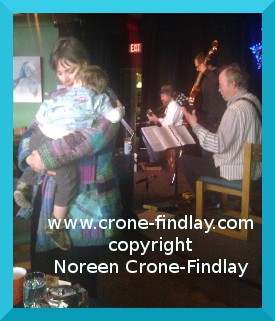 Yep… that’s one of my Saori Gypsy jackets that I wove.  Link