I told the story of how a piece of kindling wood refused to go into the fire,

who was able to have a friend, Sybbie- a very small Mermaid, live upstairs.

After the trials and tribulations of being carved and painted and shellac-ed and sanded and all that,

Dot and Sybbie finally got to go on an adventure around the studio.

First of all, after Sybbie was comfortably settled in ‘upstairs’, she and Dot when off to visit a

who was riding a Unicorn!

The Unicorn was very gentle and friendly and suggested that

Dot and Sybbie go visit the Bunny with Wings.

They had a lovely visit with the Bunny with Wings,

who asked them if they had been to the Castle on the Hillside yet?

Oooh…. not yet, so off they tootled.

Sybbie and Dot enjoyed touring the Castle on the Hillside.

They found it rather tiring, so decided that they had had enough adventures for one day.

And, they went home and had a lovely cup of tea,

and this time, Sybbie did remember to write her adventures down in her journal-

An Inspiring Piece of Firewood

Inspiration pops up in the most unexpected places.

Last week, I was building a fire in our little wood burning stove.

A piece of kindling stopped me in my tracks…

It said: “Don’t burn me! There’s something special about me- wait till you see what’s inside me!”

so, I took it to the studio…. And, Tottie Tomato listened to what the piece of kindling

(from a tree that fell down in our neighborhood) 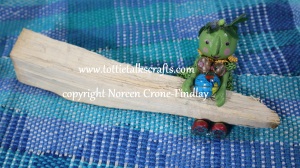 A raggedy, curvy, bent, rough piece of upcycled wood that didn’t want to be burned,

told me a story about a Spoon Doll that was looking for a Best Friend to live upstairs….

So, I cut and carved and chisled and shaped… 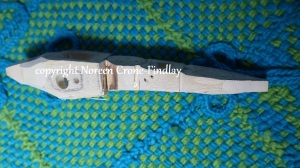 Until she was ready to find her best friend.

I walked through the house, looking for the best friend who would live upstairs and have

This oddly shaped Spoon Doll was telling me that the unusual basket ? or crown? ???

Was the ‘upstairs’ where her friend would live and that they were going to enjoy each other’s company.

Well…. friendship is one of life’s dearest treasures, so I listened when this little emerging Wooden Person

Asked a small mermaid, Siobhan, if she would like to move in ‘upstairs’.

Siobhan was delighted, and agreed to a little bit of carving adjustment so that she would fit her new accommodations:

Here’s Siobhan, all in pieces as she became smaller so she could move into her new shared home.

After a lot of carving and sanding and painting and making of new joints,

the newly tiny Siobhan announced that since she is now smaller, that she wants a ‘Smaller Person Name’,

and that she is now to be known as ‘Sybbie’.

It was now time for Dot to receive her arms and to have a coat or two of shellac applied.

Dot objected, thinking that she didn’t like the sound of ‘shellac-ing’, so Tottie Tomato and Sybbie comforted her.

Tottie and Sybbie were getting in the way of progress, so I asked them to please move to the sofa to wait.

I gave them a journal to write in and a book to read, but I don’t think that they did either.

Spoon Doll Dot was very relieved to be completely finished, and needed a few moments to recover from

the whole carving and finishing thing.

Sybbie and Tottie Tomato told her that they had been through it all, too, so they were very sympathetic.

Brave little Sybbie even consented to being re-carved more than once to get to her final happy state!

Tottie Tomato had to go see to something else in the studio, so she left Dot and Sybbie to plan their

will be posted in the next blog post.   (Here is the link: LINK)

Tottie and the Starspoon Sisters

We are in the throes of a huge winter storm.   We had one in November, but have had almost no snow since and remarkably warm and pleasant weather.

Luckily, we are blessed to be safe and warm, and this morning in the studio, Tottie Tomato had visitors.

She heard a sound at the Story Door, so she went to investigate.

It was the 3 Starspoon Sisters with a delivery of stars to add a little sparkle to a grey and stormy day.

Birch Starspoon was joined by her sisters, 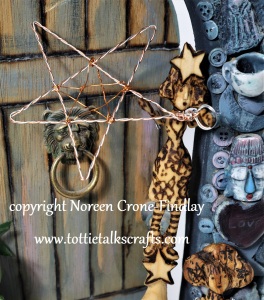 The Starspoon Sisters and Tottie were all feeling a little chilly from the raging winds outside the studio windows.

So, they all had a cup of tea while I went off to carve more dolly spoons.

Stay warm and be safe, be well and be kind ❤

Oh my goodness, how can I have forgotten to mention that the original Tottie Tomato doll that I made oh so many years ago had to retire because she wore out? 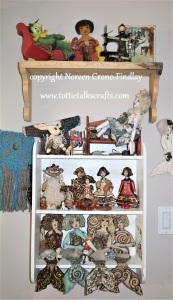 When it became clear that she was in tough shape, I set to work carving a new incarnation of Tottie Tomato. (See my About page for the story of how Tottie Tomato originated).

And the painting, and the finishing, and the jointing, then the crochet and tatting of Little Tottie’s new dress.

The smaller incarnation of Tottie Tomato is fine and fiesty and

Tottie still goes off to the Story door-

and enjoys picnics there with friends –

She watches carefully while I create more friends for her….

and loves getting to know them…

Many of our friends are in the process of selling and buying houses, and moving to new homes.

We’re holding them in our hearts and wishing them the most joyful time in their new ‘Home Sweet Home’.

So, it’s natural that my tapestry diary would be about home sweet home.

I had an ‘aha’ moment when it struck me that using the ‘Home Sweet Home’ tapestry diary piece as the front cover of a needle book would be a fun thing to do.

What’s a needle book?  It’s a way of storing and carrying your craft and sewing needles so they don’t get lost in a project bag or box or disappear inside a  pincushion.

In order to weave the spine of the needlebook, you need to be able to weave a narrow rectangle on the Thumbelina,

so, I made a video on how to make the Thumbelina Needle book.

And, the video shows how to weave the narrow band:

By the way, you don’t have to weave a little tapestry for the cover of the needle book…. plain is fine, too!

I am in love.   Well, actually, I am in a lot of loves- with my husband, our kids, our grandson, our dogs, our beloved friends, our community…..

Here she is:  The tiny, wee loom that has been the center of my attention for months now:  Thumbelina!

Thumbelina is very small, but she does all manner of wonderful things.

She weaves darling little arch shapes that are about an inch and a half wide and  2 1/2 inches long:

Thumbelina works like a lucet and a flat knitter so that you can create delightful things like little Sheep:

Must weave ALL the sheep!

and Amulet bags and clip on pouches for tiny treasures: 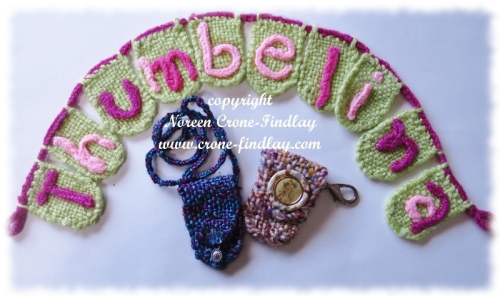 And, woven flowers, to wear, and applique and and and….

All of these treasures have their “how to make instructions” included with the loom.

This is the video that shows how to make the mini  Bunting or mini Banner with the Thumbelina loom:

To order the Thumbelina Loom, please go to:

And, now,  I am happily going to ignore the huge backlog of work that needs me to get to it.

Instead, I am going to play with Thumbelina!

Two of my hand carved Story Door Dolls for sale

I am selling two of my hand carved ‘Story Door’ dolls.

They are each 6 inches tall.

They are fully articulated and stand independently without doll stands, although they are known to play dominoes with other dolls and all fall down without giving notice.

This is The Arbutus/Madrona Tree Story Door Doll:
Her head is tilted up so when she looks up at you quite winsomely. 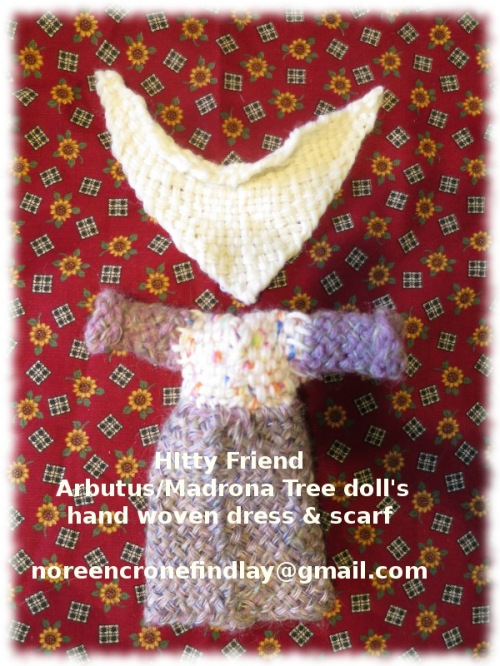 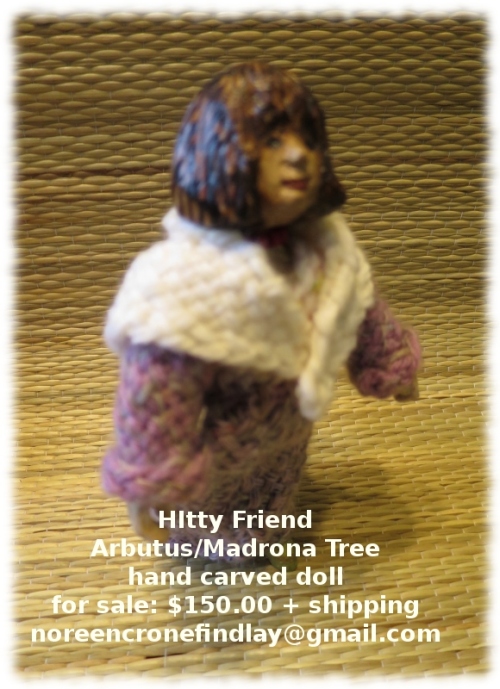 This is the Birch Tree Story Door Doll: 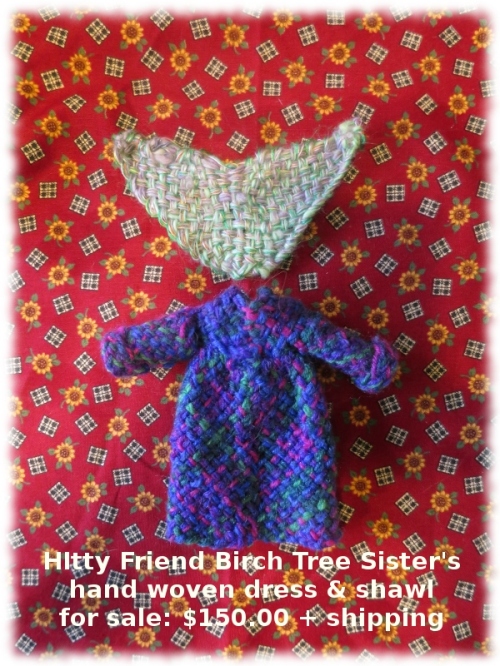 If you would like to adopt either of these Story Door Dolls, hand carved by me, with their handwoven (also by me) please drop me a note.
:o)
Noreen

leaving Coco and the other Story Door Dolls to worry and fret.  See LINK

She amazed Coco by coming home safe and sound, with a new friend, Lettie.

Coco and Lettie sat down to listen to Itty’s story.

As soon as the Story Door shut behind Itty and the tiny Tall Ship,  they whirled away through clouds and fog.

Itty was sure that the fog went on forever, and when she had finally given up hope,

The fog cleared, and there was a huge fiery Dragon!

Luckily, a mighty Wizard strode out of the mists and sent the Dragon packing:

garden in front of a very appealing door:

Itty knocked and knocked on the door, but no one answered.

Sadly, Itty sailed on until she came to another lovely garden,

where a beautiful Lady of the Earth was sleeping.

Itty whispered to her, hoping to wake her up just a little, without really disturbing her.

She leaned over the Lady of the Green Places and whispered again….

upside down, with a serious thump….

There was no response.

A bee bumbled by to investigate.

‘Um and Hello to you, too, Little One!’, a soft, not-about- to-eat-or-sail-unexpectedly-away voice came close to the bucket.

‘Standing on my head’. 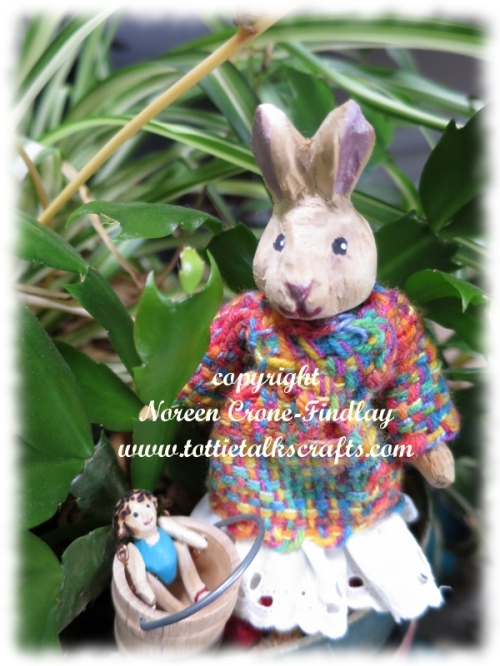 And, then, Itty burst into tears…..

‘In the studio where the Story Door is!’

‘Well, that’s easily done! I was born in the studio by the Story Door!’

‘Yes, Little One, perhaps you were busy while all the carving was happening, come on now, just close your eyes….

The Story Door is just a small wish away…..’.

And! Then! Lettie and Itty were right there at the Story Door, and couldn’t be happier about it!

The funny thing about Itty’s great adventure was that it all seemed to happen at the Muttart Conservatory….

and Jim and I were right there!

You would think we would have noticed a tiny flying ship with wee Itty Bitty Hitty on it, wouldn’t you?

Itty Bitty Hitty got carried away through the Story Door by a mischievious Tall Ship: See Here for details: LINK 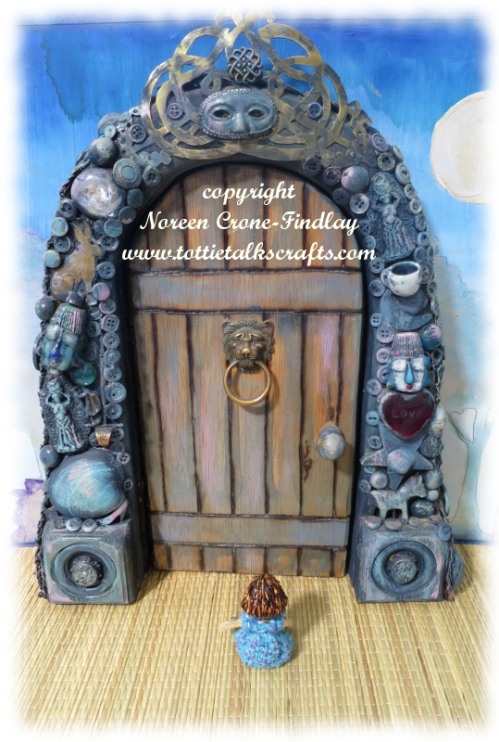 She was sure that Tottie Tomato would find Itty and send that pesky Tall Ship on it’s way.

Coco heard a sound coming from the other side of the Story Door. 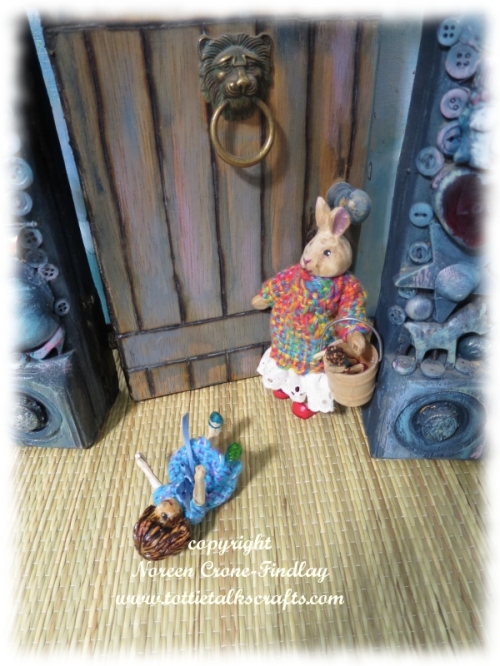 But when a lady Bunny came through the door, carrying Itty in a bucket,

Coco fell over in shock!

Itty explained to Coco that everything was just fine- more than fine, really!

She introduced her new friend, Lettie, and they sat down together

Lettie Bunny came to her rescue!

Miranda Mermaid was cold, so was very pleased to receive a new shawl woven just for her.

Her friends were all so busy admiring it….

onto the tall ship that had lead Miranda to the Story Door.

Coco saw that it was starting to move away through the Story Door….

Even though she shouted at Itty to jump, JUMP! off the tall ship….

it slipped away and the Story Door quietly, but oh so quickly,

The Story Door dolls raced off to find Tottie Tomato to see if she could help. 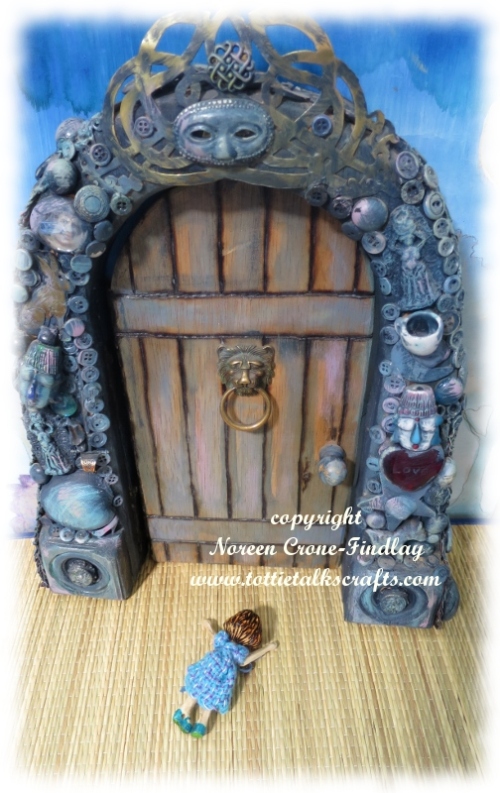 Coco was so sad that she just laid down on the ground and cried and cried. 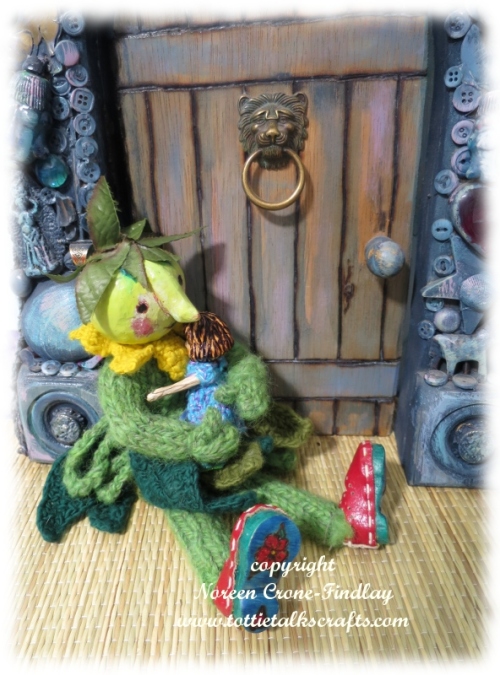 Tottie Tomato cuddled Coco and promised that she would go  find Itty and bring her home again.

Coco sniffed sadly and sat down to wait….